As Navratri festivities resume after two years of the pandemic, people are seeking out and restoring vintage dolls. We scour galleries, museums and the Moore Market in Chennai to find out why

As Navratri festivities resume after two years of the pandemic, people are seeking out and restoring vintage dolls. We scour galleries, museums and the Moore Market in Chennai to find out why

Curator Ashvin Rajagopalan of Ashvita Art Gallery has spent the past two years collecting vintage dolls. And he is not alone.

This year, even as people begin to celebrate Navratri, the nine-day doll festival, with enthusiasm again, there is more soul-searching following the two-year pandemic when the world was forced to slow down. As a result, instead of investing in new dolls, more and more people are turning to grandma’s attics and antique shops to rediscover the joys of the past.

The tradition of a home golu during Navratri is unique in South India, where papier-mâché dolls are thematically displayed on steps (usually 3, 5, 7 or 11) with offerings of sacred food every days. It’s a time to get together, invite friends to gather and admire golu arrangements, and traditionally the dolls are passed down from generation to generation. “Older dolls that are kept in the attic are often broken during handling, which is unavoidable. Therefore, it is a tradition to buy new dolls every year during Navratri,” says Ashvin. He adds that people are now moving away from the mass-produced versions sold at Mylapore, Purasaiwalkam, Kodambakkam and T Nagar, and instead looking for dolls that look like the ones their grandmothers used to collect.

During the calm of the pandemic, Ashvin began restoring vintage dolls as a hobby, then became so enthralled by the process that he began building a collection. “The good quality terracotta dolls that existed at the time were made by artists who took time and patience and understood the value of craftsmanship,” he says. Just in time for Navratri, Ashvita unveiled a collection of over 15 golu dolls, all between the ages of 60 and 80, which have been restored and repainted. Selling for between ₹35,000 and ₹1.5 lakh, these dolls sell out fast. “The cost of vintage dolls depends on how many days it takes to restore them,” says Ashvin. These include religious figures such as Krishna in different ages, goddesses Lakshmi and Saraswathi, Lord Shiva, Muruga and Vinayaga.

Artist, doll restorer and painter, S Paramasivam, who works out of her shop, Jai Maruti Manual Arts in Mylapore, says: “Families are emotionally attached to dolls that have been passed down from generation to generation. In the last two years in particular, more and more people have come to me with requests to restore their vintage dolls.

This year, as many families adjust to scaled-down golu arrangements, the focus is increasingly on finding dolls that are meaningful to them. “Everyone spends a lot of time looking for the perfect doll,” says Paramasivan. “I had a client who found one near a temple and picked it up because he was fascinated by its thirutham and lakshanam (visual balance),” he says. .

Sivaraman Iyer’s Mumbai-based catering business Food on Wheels has launched a service called Golu on Lease. “We have a collection of dolls and steps (3, 5 or 7). Our staff takes the dolls and arranges them by theme, then takes them down the steps and brings them back to our descent,” he says. They launched their service in Chennai last year. “This year, we have implemented golu in over 365 homes in Chennai, mainly for the elderly who were unable to arrange it on their own. Golu on Lease is the most suitable option for those who don’t have the necessary manpower or storage worries. Young couples who are interested but do not have the paraphernalia also call on our service,” he adds. For more details call 9833671389.

“Often the head, arms or legs are broken. I recreate the broken part and blend it in proportion to the doll,” he says, adding that his particular skill is “drawing eyes and lips, as well as blending colors.” Paramasivan uses metal clay, resin, hardener (MSeal) and fine metal wire to recreate the broken parts of clay dolls. When it comes to papier-mâché dolls, he mixes newspaper and sealing liquid. For painting, he mainly uses acrylic and automotive paint. Its fees start at ₹500 and increase depending on the amount of work required.

Chennai-based visual artist Anbukadhir Jacob leads the Crafts Council of India’s Golu Doll project. “I worked with two experienced doll makers in Kanchipuram. We made a clay model and developed 21 different types of moulds,” she explains. The molds developed by CCI include Hindu gods and goddesses such as the Rama set, the Lakshmi-Saraswathi set, Vishnu, Vinayaga, Krishna and the dancer set.They are around 14 inches tall and prices start at ₹1,300. “The dolls needed a critical shift in visual perception right from the design, outlines, proportions, posture, features, jewelry, costumes to the final finishing process of choosing the appropriate paint material , color palettes and painting techniques,” says Anbukathir, adding that she and the artists worked together to improve the dolls while being realistic about the limitations. “They were initially reluctant and unenthusiastic about the intervention to move on to new shapes and color combinations, but once they saw the result, they gradually started to be more grateful and tolerant,” adds she.

Paramasivan gives tips for packing and storing the dolls: wipe the dolls dry, wrap them with parchment paper, then wrap them with a cloth or gada bag. The next step is to wrap it again in bubble wrap and secure it with tapes. Now this needs to be wrapped with newspaper and kept in boxes. Packing this way ensures that there is no or less damage to the dolls.

“Sales have been extremely encouraging as they sold out in two days and manufacturers have secured pre-orders for next year’s Navratri,” says Gita Ram, CCI’s general secretary, adding that the new molds have been left to the public. doll makers as creative property.

The Moore Market in Chennai, popular with antique hunters, offers a wide range, usually priced between ₹200 and ₹2000. “We source from households and temples,” says A Soosai Raj. In the business for 12 years, Soosai is known for his collection of coins and miniature toys. “Look at these vintage dolls. Do the dolls made today have this nerthi (perfection and clean finish)? he asks holding a baby Krishna, who he thinks could be over 70 years old. 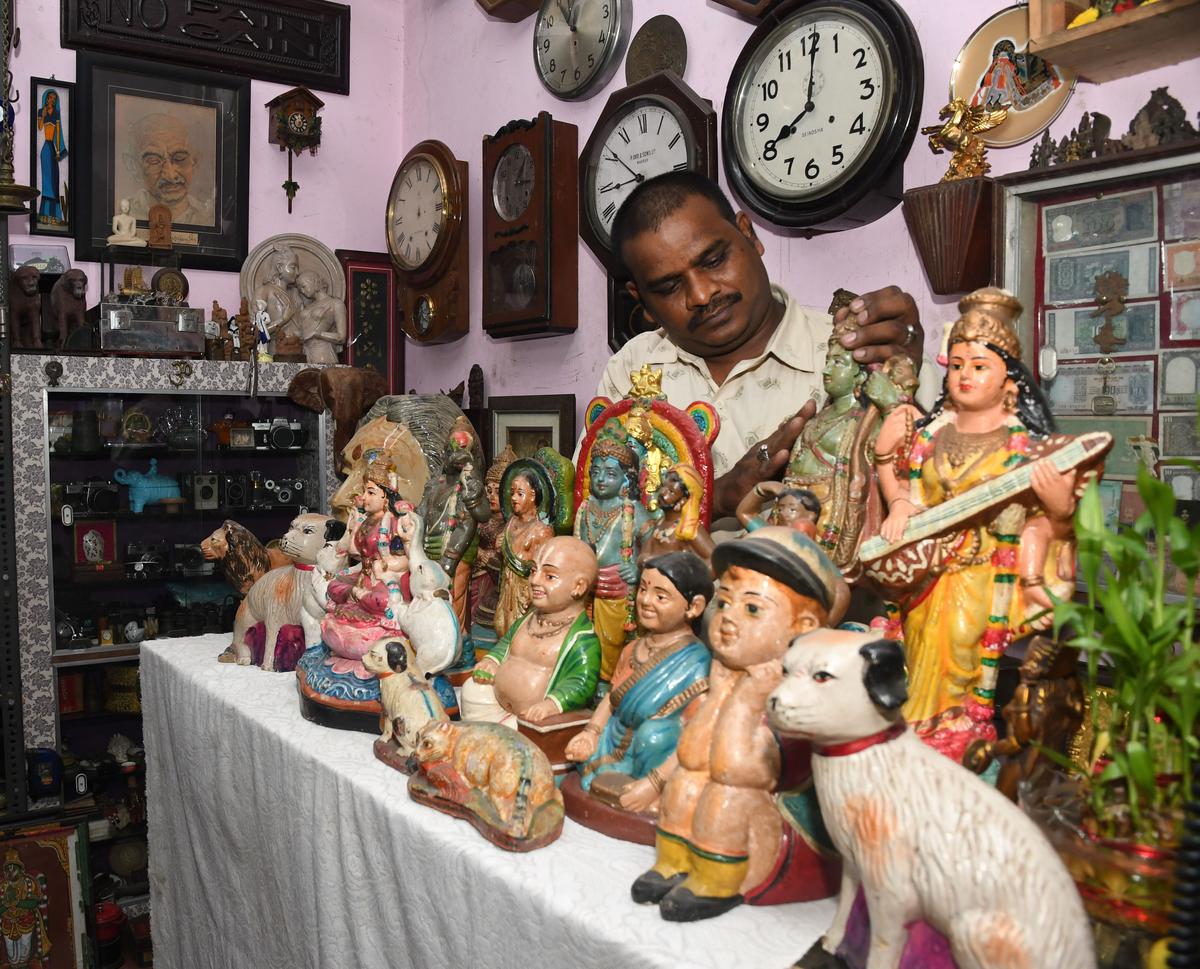 S Velayutham, another Moore Market antique dealer who has been in the business for 14 years, says vintage dolls are also in demand in the film industry. “The producers of period films or television soap operas rent them for a fee (rental by the day or by the week, plus transport costs). Apart from that, we have gallery owners and collectors from all over the world who buy them from us,” he says. Antique dealers say golu dolls are increasingly being sold or donated to temples as people move from houses to apartments.

This Navratri, a submarine golu is an option to consider during sundal rounds. Dolls featured on a traditional seven-step setup at VGP Marine Kingdom have been specially designed to avoid dissolving in water. The craftsmen’s challenge was to make the dolls painted with non-toxic paints resistant to salt water by coating them with waterproof resin (epoxy art resin formula). The resin prevents soaking and, more importantly, is also environmentally safe, according to the manufacturers.

At the open-air heritage museum, DakshinaChitra, the ongoing exhibition Uruvakkam features vintage dolls as well as the painting or newspaper image that inspired them. Each has a story, some dating back a century; most of the dolls are 80+ years old and have been curated by Indhumathi Mohan and Dingdi Gangte, the museum library staff.

The most donated dolls were painted by in-house restorer L Amirthanathan. “While MK Thiagaraja Bhagavather, actor Baby Saroja, are offshoots of cinema, the images of national leaders and Bharat Mata reflect the nation’s struggle for freedom.” The dancing doll series were all made the year of the release of the Tamil film Chandralekha”, explains Indhumathi.

“Nostalgia plays a huge role here,” says Ashvin, explaining why people go to such lengths to find and restore vintage dolls. “They bring back fond childhood memories. They bring back the ability to appreciate a certain beauty that we seem to forget in this fast-paced world of cost-conscious, commercial and commodified products. Next week wonder fans will meet young superhero America Chavez as she makes her MCU debut in Doctor Strange in the Multiverse of Madness. But you can start your merchandise collection early with the special edition doll from boutiqueDisney. (Please note that this article contains affiliate links. Your purchase will support LaughingPlace by paying us […]

Russian Doll Season 2: The role of Annie Murphy will be the ‘heart of the season’, says Lyonne

| Moana is back as a new doll arrives from Disney as part of their Ultimate Princess Celebration collection. This series of limited-edition dolls are carefully crafted by incredible artists from across the Walt Disney Company. The latter comes to us from Designer Nontra Null putting her passion behind this doll with an inspiration between […]