My daughter loves shopping and we don’t mind taking her with us. Sometimes we let her go and choose a toy. She wanted another baby to add to her collection. So on a recent trip to Target, she walked down the doll aisle and had her eyes glued to a baby alive doll.

I said, “Pick whichever you want” and she grabbed one of the babies that had a mixer called Baby Alive – Magical Mixer Baby Doll Tropical Treat. We grabbed the box, put it in the basket and headed to the checkout. I have to be honest, I didn’t pay much attention to the type of doll or its features. It was my mistake!

That night, I learned my lesson. Always read about every toy you bring home for your kids!

Here’s what I missed:

Most of what I should have read were big no-no’s.

When I got home, I opened the box and it came with the doll, 2 sachets of powdered food, a blender, a comb, a spoon, a bottle and some nappies.

When you ran out of diapers and food packets, you could buy more at exorbitant prices. I was hoping my daughter wouldn’t understand the point of the food packets, but she knew immediately. Basically, asking me a million times to put the powder in the blender, then mix with water, so she can feed her baby. I wish I had taken a picture of the food, but it felt like throwing up Vegas bombs when you had next to nothing to eat the night before. 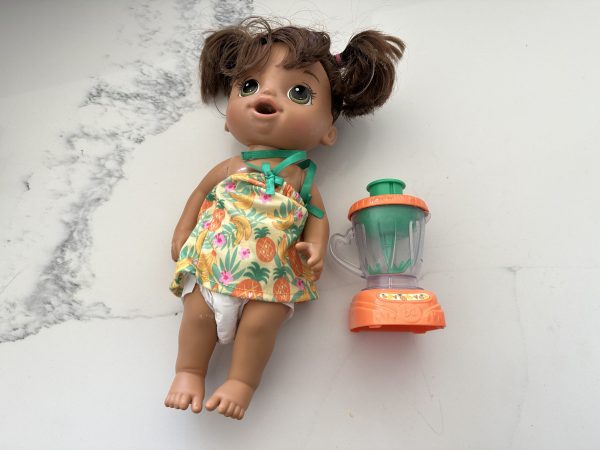 I don’t know which had more fake food, the baby or our floors. Within minutes she was finished and asked me to prepare more food. I tried to let her know it was our last packet of food and there would be no more, but she insisted on feeding the doll again. So we did.

Then we sat patiently waiting for the doll to pretend to poop in her diaper. An hour later, I’m sitting on the couch and I see my daughter coming from the basement. She walks over to grab a towel, and I ask, “Why are you grabbing a towel?”

She looked at me with the cutest, most innocent face and said, “Baby made a mess.”

I walked over, grabbed the towel and asked him to show me where the mess was. Apparently the Baby Alive we had was special because it not only peed and pooped, it also threw up! The fake food was coming out of the baby’s bottom and mouth.

What, I thought, was Baby Alive – Magical Mixer Baby Doll Tropical Treat was actually Baby Alive – A long night at the American pub for $1, you name it.

We cleaned up the mess together and I explained to my daughter that we probably overfed her.

A day later and for two weeks now, I haven’t seen her play with the Baby Alive since.

Did you like the article and want to help Wichita By EB’s continued free content? you can help bring our site to life with a simple one-time or recurring donation. Your contribution is appreciated.

Are you a business owner and want to be featured or partner for a highlight? Visit us here.

Bollywood doll Sunny Leone got Anurag Kashyap film, actress did something like this thanks

New Delhi. Sunny Leone is known for her bold style. He gave many bold films in his career. She became an adult star. For which she has become famous all over the world today. But along with that, he was also able to hear the truth from the side of the people. Sunny has given […]

STAUNTON, Va. (WHSV) – Studies show that high self-esteem is linked to academic achievement, and experts say performance is important for all ages. Self-confidence begins to form at a very young age, even before social media made its mark. Many say that when children see toys and characters in a variety of skin tones, they […]

Mumbai: The famous Baby Doll singer, Kanika Kapoor, who has sung many hits, is about to get married. Kanika will exchange her wedding vows with an NRI businessman in May this year. Kanika’s future husband is a certain Gautam. This will be Kanika’s second marriage. She was previously married to Raj Chandok who was also […]